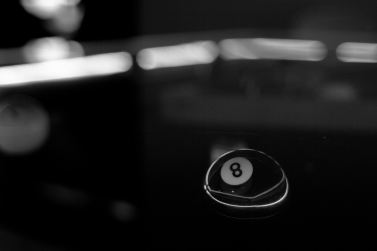 and reminds me of the infinity sign when placed on it’s side. Pretty cool stuff. It is also frequently the recommended amount of healthy things, such as eight 8-oz glasses of water each day, and eight hours of sleep per night. It’s that last one, though, that has me all riled up.

I used to be the best sleeper, rarely having trouble making it through the night. But lately it’s been getting more difficult for me to do much less hit the recommended eight hour bar for adults. Why, I wondered? I recently shared this frustration with my dentist of all people when she asked how things were going. Despite our somewhat broken chats in between metal tools maneuvering around my pearly whites, I’m thankful to have shared my sleep concerns.

She agreed with how challenging it can be on days following a poor sleep night (much less multiple nights). She told me about a great book she discovered recently on the topic of sleep. Perhaps it could help me uncover a better understanding behind my newfound lack of Zs? Sure, why not. I always love a good book recommendation.

Well folks, if there is one non-fiction book you read this year, this is it: Why We Sleep, by Matthew Walker, PhD. It helped shed some light on why I might not be sleeping as well, and that I am justified in my concerns about the amount of sleep I’m (not) getting. And Walker would know. In addition to writing his noteworthy book, he is the director of UC Berkeley’s Center for Human Sleep Science, and has spent 20 plus years studying the topic.

The book presents oodles of interesting data in an easy-to-understand format on what turns out to be a surprisingly serious topic. A lack of sufficient sleep affects so many facets of our lives, such as memory, mood, the ability to safely drive a car, potential misdiagnosis, even being productive at work and school, just to name a few. And according to Walker, “The silent sleep loss epidemic is the greatest public health challenge we face in the 21st century in developed nations.”

What?! We’re talking about sleep here people – you know, that free thing we all have access to? But somehow getting those eight hours (even more recommended for teens) has become easier said than done. Getting a good night’s sleep also seems to have developed a stigma in our society (e.g., important people don’t have time to sleep). And forget about napping (e.g., lazy people nap), which turns out to be a healthy idea! After exploring the research findings yourself, you may discover that this misguided mindset about sleep’s value is what’s keeping you from your best life.

I consider this post a public service announcement to my friends, family and fellow parents. Do what you can to make sure everyone in your family is getting a healthy dose of sleep.

Let’s start with just a few concerning things for a person consistently getting a less than desirable level of sleep. Walker presents the following points quite early on in the reading:

While I’m not an alarmist, if there’s something I can do now to make my days even fuller, in addition to increase my chances of warding off disease in the future, I’m game.

I consider this post a public service announcement to my friends, family and fellow parents. Do what you can to make sure everyone in your family is getting a healthy dose of sleep. Ok, our dog probably doesn’t need more sleep

since that’s pretty much what she excels in, but I’d say the get-more-sleep mantra applies to the rest of us. And I don’t use the word “dose” lightly; sleep is apparently being prescribed by doctors more frequently now than ever before. What has the world come to if we need a prescription for sleep in order to take it seriously?

As a parent of two, I’ve heard the buzz about teens needing more sleep in order to better handle classes and the challenges life throws their way. Of course it makes logical sense that they would need a good amount of sleep to support their still-developing brains and ability to absorb new material at school. But can’t they just make up for a crazy week at school by sleeping in on weekends? Apparently not, especially if that crazy schedule is an ongoing occurrence.

For starters, those zero period classes scheduled early in the morning? They’ve got to go in order to give adolescents access to valuable sleep benefits only obtainable at certain times of day based on one’s natural circadian rhythm.

“It is the lack of REM sleep – that critical stage occurring in the final hours of sleep that we strip from our children and teenagers by way of early start times – that creates the difference between a stable and unstable mental state,” Walker shares. What a frightening reality for a family that’s always on the go, or that casually thinks getting even six hours of sleep each night is considered ok.

Well, full disclosure, folks. Both of my kids experienced the zero period in high school. Wanting the best teacher who taught early in the day, or fitting in enough honors and elective classes was the norm in our world. Had I known then what I know now, I would not have been ok with their schedules. I’m happy to report that both of my kids are on board with this healthier mindset and no longer join in on the early morning course overload. Better late than never, I say! And our family is much happier and healthier for it.

With a new school year fast-approaching, please think twice before being okay with your student registering for that early morning zero period class. There’s still time to change it, and it could make all the difference in having the healthiest school year possible.

Another surprising point I encountered in Why We Sleep is that trying to pull an all-nighter to cram for something (e.g., study for a test, prepare for a presentation) is not as helpful as one thinks. The brain apparently continues to process recently learned information during sleep, which is a required step for memorization.

“If you don’t sleep the very first night after learning, you lose the chance to consolidate those memories,” Walker explains. “Sleep for memory consolidation is an all-or-nothing event,” he continues.

If the goal is learning, it’s therefore a better choice to get a good sleep night after

preparing instead of staying up all night trying to memorize things that your brain could do more effectively while asleep. So next time you think about posting that picture on social media at 4am showing everyone how cool you are for staying up with the help of a huge mug of coffee, turn off the light and get to sleep so your brain can continue processing. I for one will think you’re much cooler for it!

Another rather alarming point I found Walker to make was that there is an apparent link between sleep deficiency and the epidemic of ADHD (Attention Deficit Hyperactivity Disorder).

If you look at the symptoms of ADHD, “these symptoms are nearly identical to those caused by a lack of sleep,” he reports. He goes on to clarify that although “not every child with ADHD has poor sleep,” research has shown that “more than 50 percent of all children with an ADHD diagnosis actually have a sleep disorder, yet a small fraction know of their sleep condition and its ramifications.”

That percentage seemed so high to me, and especially concerning as parents may not even know their child has a sleep disorder. The main point I see here is to make sure one talks with their family doctor about any possible sleep issues in conjunction with an ADHD diagnosis, as it would be a shame for a child to unknowingly receive treatment for the wrong thing.

But don’t take my word for any of this, as I’m not the sleep expert here. Check out Walker’s research and decide for yourself.

Until you’re able to get your hands on the book (there’s a hefty wait list for it at my local library), click on the list of tips referenced below from NIH Medline Plus* that could help you become a more effective sleeper starting tonight. Walker includes this same list in his book’s Appendix (Twelve Tips for Healthy Sleep).

Now back to my sleep problem. After reading Why We Sleep, I am sleeping better!

I’ve been trying out some of the 12 tips myself, which includes cutting out that afternoon coffee run or chocolate treat, not drinking fluids so close to bed time, and shooting for a consistent bed time each night. No easy tasks, mind you, but at least I’m moving in the right direction.

Well that’s all from me today! Best wishes to you for reclaiming your eight hours. In the meantime, may your sheep-counting efforts be fruitful.

Tips for Getting a Good Night’s Sleep*